The VAP11G-300 is a unique device with a fixed ethernet to wireless bridge that helps in situations where:

END_OF_DOCUMENT_TOKEN_TO_BE_REPLACED

Combine an Arduino Nano with the ATMega 328, a ESP-01 ESP8266 on one board,, couple the two processors via a (software) serial connection, add a 3.3 V power regulator, make it breadboard friendly, write some tutorials aimed at starters, and you have an idea what the NanoESP is about.

Franzis Verlag and Fabian Kainka are the driving forces behind this nice little board. Sold by Conrad as C-Control IoT WIFI Board (ESP8266), Elektor and Reichelt in Germany for Euro 29,95 (as Pretzel board  – IOT WIFI Board). I got one for Euro 24,99 at the Dutch webshop of Conrad! (Easy to get outside Germany too, with (sparse) German documentation.

END_OF_DOCUMENT_TOKEN_TO_BE_REPLACED 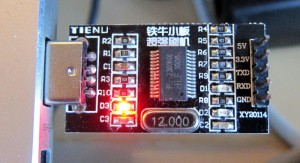 Like many I have imported from China, USB to Serial devices with IC’s made by Prolific. Mine are PL2303HX based. And they do not work anymore! Yellow mark in Device Manager, device cannot start. Reason: Prolific made an update to their Windows drivers to fight the fake IC’s coming form China, like FTDI did (see my FTDI unbricking article) and amde older devices unusable. Windows update, which is by default automatic getting the latets drivers, make it impossible to install older drivers, just gets overwritten very fast.
But you can battle this and get the Prolific driver working again. I did this for two PL2303HX based USB interfaces. Tested with my PL2303HX USb devices and PuTTY serial and a jumper connecting TX-TD to see typed characters coming back in.

Edit march 22 2016: Have a look at https://github.com/arduino/Arduino/pull/4517 There is official support coming for ARM!

This is a current build of the latest IDE for ARM, runs on RPi2 and RPi3 as reported, http://downloads.arduino.cc/javaide/pul … arm.tar.xz

I found a recipe to install Arduino IDE 1.6.0 on the Pi. Still not the latest, but much newer than 1.0.5 you get from the repositories. This is a fast process!

And on the Raspberry Pi forums a recipe for 1.6.5. Much slower to install, but it brings IDE 1.6.5 (which I need for the ATTiny85 and Micro pro!

END_OF_DOCUMENT_TOKEN_TO_BE_REPLACED

I got a very cheap USBASP programmer for AVR from ebay. Long cable with 10 pin connectors and an adapter from 10 to 6 pin.
To be used for programming an Arduino where the bootloader is not wanted at startup or when it takes too much space in the RAM. 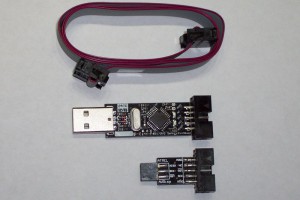 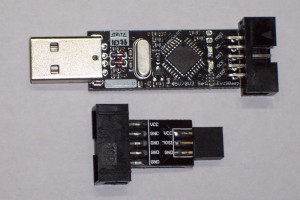 You can program a skecth into an Arduino when the USBASP is connected with the Menu option Sketch: Upload Using Programmer. This also removes the bootloader, making space.

END_OF_DOCUMENT_TOKEN_TO_BE_REPLACED

ASCII ART, to copy into sketches or online.
ASCII ART by busyducks

END_OF_DOCUMENT_TOKEN_TO_BE_REPLACED 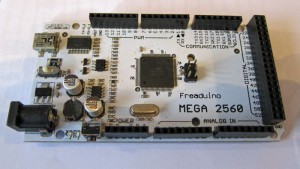 Here are the steps!

All my standalone Arduino’s on one page. Also see the Raspberry Pi connected ‘Duino’s.
Each has been tested by compiling and uploading the standard Blink program or a variant.

Tested with the Arduino 1.6.5 on Windows 8.1 except the Freaduino tested on the Raspberry Pi!

All are cheap but well made clones from China. All but one worked fine the first time. One, a Funduino, had a damaged bootloader, repaired with the excellent Bootloader program by Nick Gammon. And that Uno is fine now also! END_OF_DOCUMENT_TOKEN_TO_BE_REPLACED