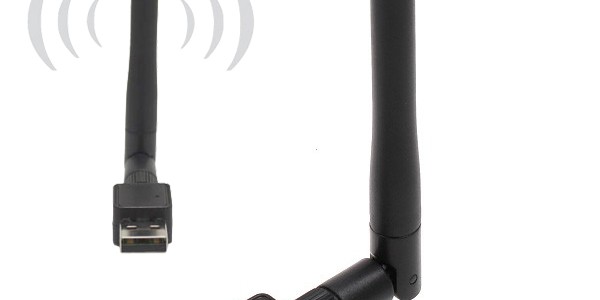 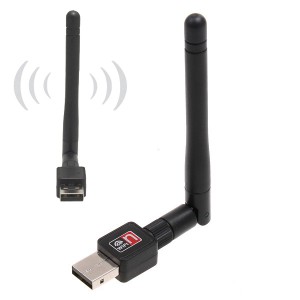 I bought on ebay a year ago several wireless adapters with a large external antenna. Good range, recognized by wheezy and jessie Raspbian.
The lsusb command showed me those were RT5370 IC based Ralink devices, with driver support in the 3.x and 4.x kernel.

Witht he growing amount of Raspberry Pi’s here I thought it was a good idea to buy some more, and the Ebay adverts showed the identical looking device:

After several weeks they arrived, and the first test in the Windows PC’s showed a working wireless interface. So far so good.

In a Raspberry Pi alas, no WLAN0 device showed up. Time to troubleshoot!

lsusb showed there was a new USB device:

The older working Ralink adapter had a different usb output:

So we have a new device, it is the MediaTek MT7601. Quick search with the ID 148F:7601 revealed this is indeed a new device. And it is supported with firmware in Linux kernel 4.2, the Raspbian kernel is still 4.1 and is not so far yet.

But a helpful post in the raspberrypi.org forums by MrEngman pointed me to the (now deprecated for kernel 4.2) to this command to load the driver:

and all was well again.

Note this is tested on jessie

If you want to rebuild the driver, from the Mediatek driver source without debug info, follow this recipe.

RPi Cam Web Interface in action
This is my second test of the timelapse/video facilities of a Raspberry Pi with the camera on top. So I did a standar...
3.5" LCD TFT Touch Screen Display Kedei on AliExpress
When surfing for information on 3.5 " TFT touchscreens for the Raspberry Pi, to improve the TinyLCD experience, I stumbl...
WLAN manually
How to setup a WLAN manually, if the desktop is not available (its a small widget on the left top otherwise) Find out...
Zigbee and Domoticz
Part 2 of the Domoticz project: Zigbee devices added. The living room now has 4 Domoticz Zigbee lights!