The VAP11G-300 is a unique device with a fixed ethernet to wireless bridge that helps in situations where: 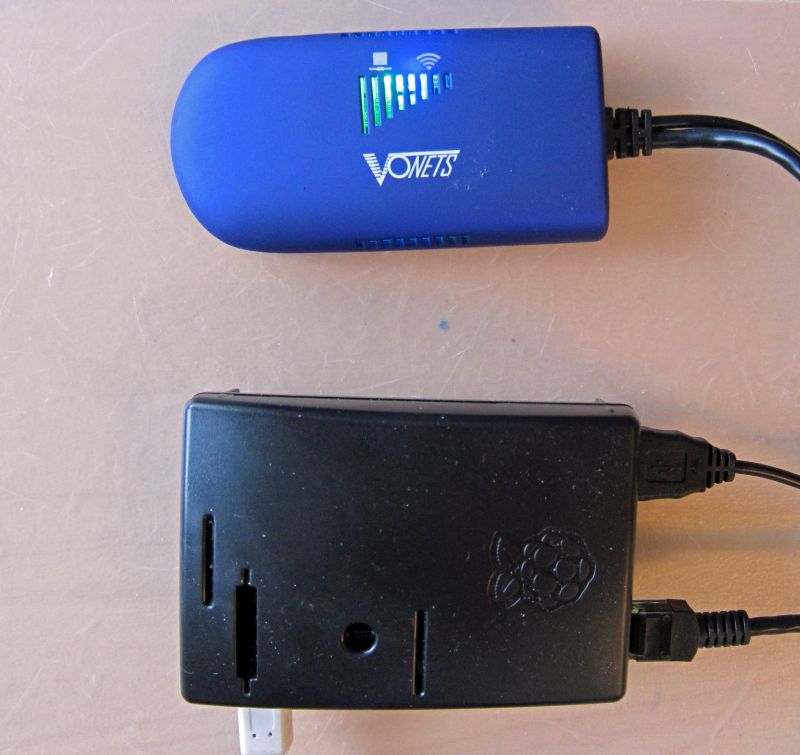 The VAP11G-300, with a size comparable to the Raspberry,  has two cables: a USB power cable USB A and an ethernet cable with the RJ45 connector.
A powerjack is also availlable. Status leds show its operation.

With the VAP11G-300 the WiFi intelligent bridge function one can just plugin the ethernet cable, and the device functions as a transparant bridge via wireless to the network. Perfect to configure the Raspberry Pi B’s headless or to avoid the often troublesome and powerhungry wireless adapters taking up an USB connector.

The device is quite simple to setup. The device in factory default setting or after a hard reset functions as a wireless acccesspoint with a configuration webpage.
Turning it on by plugging the USB power  cable in a supply or plug a powercable in the powerjack of the device and, from a PC or tablet or phone look for the SSID VONETSXX.
Connect to the open Access point and enter the url http://vonets.cfg.
With some clear configuration steps the VAP11G-300 can be connected to your wireless network.

The default is to function as wireless repeater + bridge, the repeater function can be disabled. Once this is done and the device rebooted the ethernet cable functions as a fixed ethernet connection.

TinyLCD 35 from Tinylcd NeoSec
Update April 3, 2020 I reinstalled the TinyLCD screen on the latest Raspbian. And sofar it works well, fast screen up...
Raspberry Pi Zero
A new Raspberry Pi, appeared end of November 2015. Called Zero, a break with the naming convention of A, B, A+, B+, Mode...
Revive a Freaduino MEGA 2650
The Freaduino MEGA 2650  looks a nice board at first view. It is advertised as Arduino MEGA 2650 compatible with many ex...
Arduino kits, components, I/O components, sensors
To get to know the Arduino world better I have bought from ebay two kits: 37 in 1 sensor kit and an Arduino kit. Nice bo...